Turkey’s Middle-Democracy
Issues And How To Solve Them:

As Turks, we owe a debt of gratitude to Atatürk and his fellow fighters. It was they who set out to raise our nation to the highest standard of civilization and prosperity. Starting almost from scratch, Turkey has succeeded in joining the leading economies of the world and established a bedrock of democratic governance.

Turkish society has readily adopted – and, indeed, now presses the government for – that democratic governance. Yet democracy remains inconsistent in Turkey. Our economy suffers ups and downs depending on the foresightedness of our government, and it is by no means easy to make a long-term plan to enhance the nation’s welfare in a sustainable fashion. Yet the occasions on which it has failed or been interrupted have served as lessons from which we can learn.

In essence, however, Turkey’s challenge is not actually the protection of democracy but the prevailing rule of law over the judiciary – both in establishing accountability and for fair representation. When this fundamental problem is solved, the problem of maintaining democracy will also be automatically resolved.

This is the paradox, the pressing problem that Turkey must promptly solve. And the solution starts with assuring accountability in the judiciary and in public administration in general via a re-assertion of the rule of law.

The purpose of this book is to identify Turkey’s fundamental problems, to demonstrate the root causes of those problems via the interspersion throughout of references to many legal texts, and to propose suggestions for their solution, thereby plotting a simple road map to democracy. Its aim is to be the most comprehensive of all the works created to date on the democratisation of our nation. 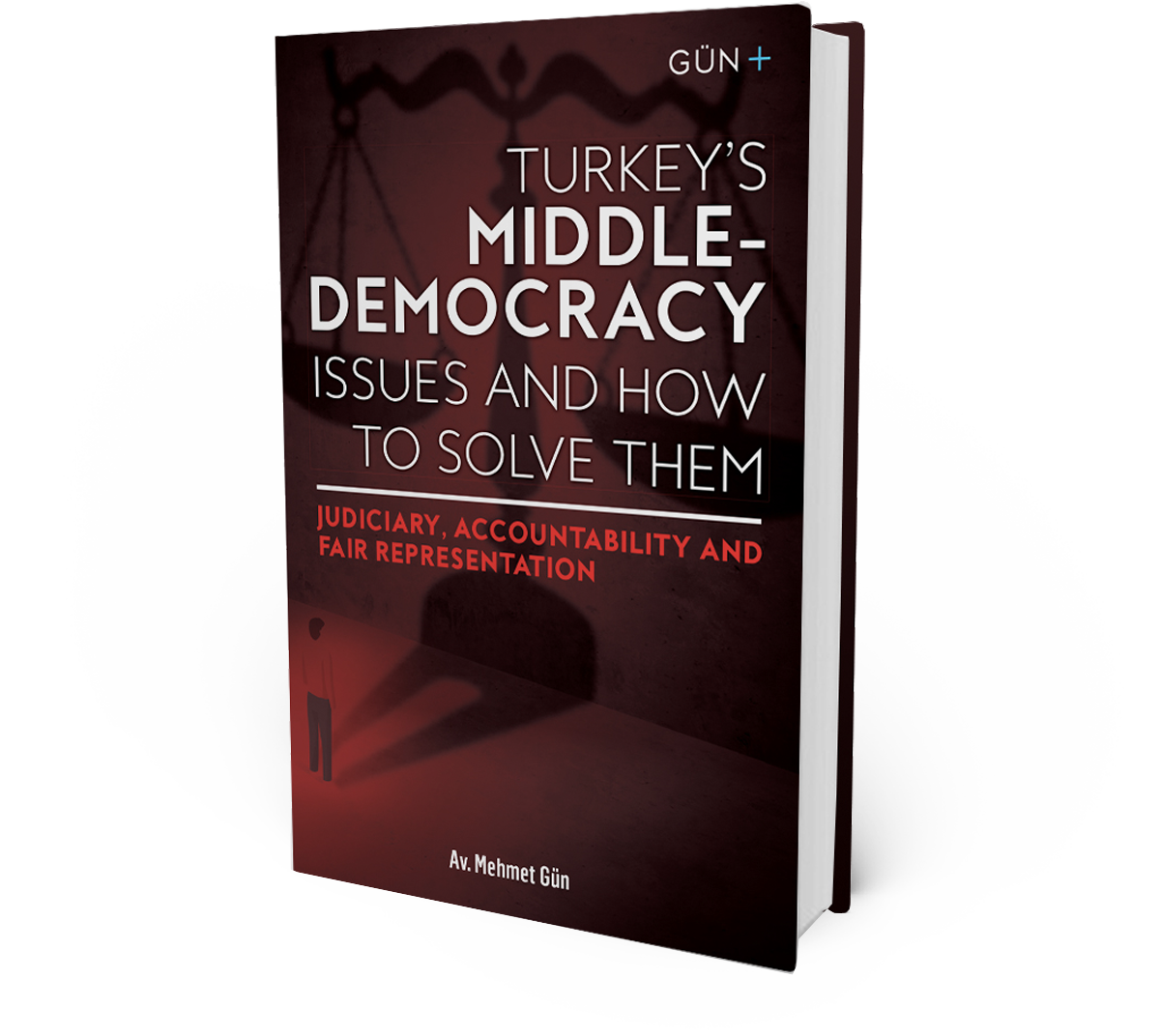 A country’s judiciary has a crucial role to play in how it is run. If it is independent of political influence, well-managed and properly resourced, it can be a vital tool in holding the government to account. At the moment, Turkey’s judiciary is unable to do this. As a whole, the system cannot work effectively enough and there is a large backlog of cases. In addition, current rules allow the government to exercise too much power over the judiciary and it is difficult to hold them to account. As such, public trust in the judiciary is currently very low.

In order to improve our country’s judiciary, I propose:

Accountability and transparency are fundamental principles of the law, and these concepts have a lot to offer in wider society too. At present, professional organizations with public institution status and political parties lack the standardised rules and systems to make competition between different points of view fair or representative.

The following key changes could help make the system fairer for everyone, and help the Turkish people feel that they are being fully represented:

There are also some key changes that need to be made to the way that elections work in Turkey for the results to truly represent the Turkish people. These changes would make voting systems more democratic and help them to more fully represent people of all perspectives. It is my hope and firm conviction that this would lead to greater engagement with politics.

Before the efforts to make a new constitution begin, the judiciary should be reformed and freedom of expression should be established. These improvements will create an appropriate environment for beginning a solemn and challenging process such as this and foster the necessary spirit of compromise across all groups within the public. A law should be enacted setting out the framework, secretariat, resources and methodology which will govern the process by which the new constitution will be created. The process should not be an initiative given to only one person or group but a common endeavour of the entire public.

Once a new constitution has been created, then the appropriate organization should be created in order to protect it.

Ece Temelkuran – Journalist and Author of How to Lose a Country

“The book should also be regarded as a moral and political stance against the idea that has been dominant in Western political and intellectual circles for the last two decades: that Turkey is an oriental country that can and should be content with less democracy under an authoritarian regime.”

“The author, as a seasoned lawyer of 40 years, has identified crucial changes that can be made to the Judiciary for it to function more effectively.”

“This book provides an opportunity to understand and engage with Turkey’s fundamental problems and potential solutions. It plots a simple road map to democracy in Turkey.”

“I believe that this work will contribute greatly to a society of people who become the most ardent defender of democracy “for themselves” in the face of injustice, but fail to act in the same manner when it comes to requiring democracy for others.”

“An intellectual and a committed patriot, Mr. Gün strives for democratic development in Turkey thought his work and efforts.”

Orhan Turan – Chairman of the Board TÜRKONFED

“This is a book that makes its focus on solutions clear from the outset. Through the course of the work, Mr Gün explores how to establish the dominance of the rule of law; promote transparency and accountability, especially within the executive branch.”